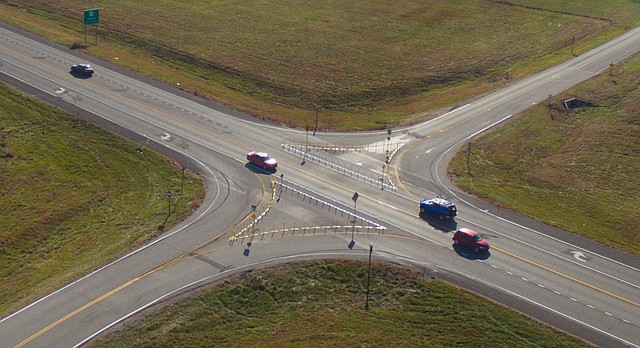 Work will begin Thursday on the placement of a divider along the center line of Kansas Highway 10 at its intersection with East 1200 Road.

Randall said the poles would be yellow but would otherwise be like the white poles installed at the intersection to mark the right-turn lane to and from East 1200 Road, which becomes Kasold Drive in Lawrence.

The work will occur during daylight hours, Randall said. KDOT’s goal is to complete the work Thursday, but it may extend into Friday, weather permitting, she said.

Traffic will be flagged through the work zone, and motorists should expect delays of as long at 15 minutes, Randall said. There will be no K-10 access to or from East 1200 Road from the north or south while the poles are being installed.

Cillessen and Sons Inc. of Kechi is the primary contractor of the $11,033 project.

After considering other options, which included closing all K-10 access to East 1200 Road from K-10, KDOT decided in July 2016 to restrict the K-10/East 1200 Road intersection to right turns only.

For more information on work on Wichita-area highways, go to www.ksdot.org/WichitaMetro.